ACHS Raiders team advance to playoffs after loss to Chargers 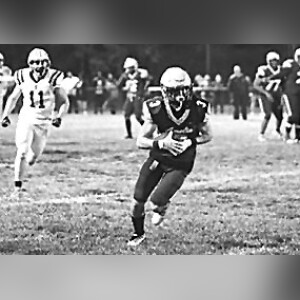 GOING FOR THE FIRST DOWN — Senior wide reciever Grant Amiss catches a pass from freshman quarterback Sterling Smith for a Raider first down during Friday’s game against James River District champions Central Lunenburg.

The Amelia County High School Varsity Raiders hosted the Central Lunenburg Chargers on Friday (Nov. 4) in a James River District Championship game. After a long hardfought battle the Raiders would fall 22 to 8.

The Raiders offense moved the ball well all night against the Charger defense on the ground and through the air. Senior running back (RB) Daquan Pegram got off to a good start carrying the ball for the Raiders before leaving the game with an injury midway through the first quarter. Junior RBs Marquelle Royal and Jakye Woodley would manage the load on the ground with Royal having a couple of long carries.

The Raiders defense would force the Chargers to work for every yard. The defensive line of juniors Daveyon Royal, Darius Jeter and James Poole would provide a strong battle upfront. In the defensive backfield, linebacker (LB) Marquelle Royal and defensice backs (DB) Anthony Harris, Justin Perry and

Grant Amiss would come up and support the defensive line stopping the Chargers offense. The game would go to halftime with the Raiders trailing 8 to 0.

In the second half, the Raiders offense was able to drive deep into Charger territory but would fail to produce any points. The second half would also provide wild plays including a fumble that was tipped around multiple times by both teams before a Charger ran all alone into the endzone with the ball to score for the Chargers. The Raiders would respond with a backward pass from Todd Spurlock, now in at QB, to Grant Amiss who threw a 40-yard bomb to Anthony Harris for what appeared to be a Raider score, unfortunately it was called back for a questionable forward pass penalty.

The Raiders would eventually get on the scoreboard with a Spurlock pass to Harris bringing the final score 22 to 8.

The Raiders advance to the playoffs and will face the Thomas Jefferson Vikings at 7 p.m. tonight (Thursday, Nov. 10) at Huguenot High School in Richmond. The Raiders suffered a loss to Vikings the second game of the season, however the Raider team that faced TJ earlier looks vastly different from the team as several Raiders were out for injuries. The game was originally scheduled for tomorrow, but was changed to today due to the weather forecast.